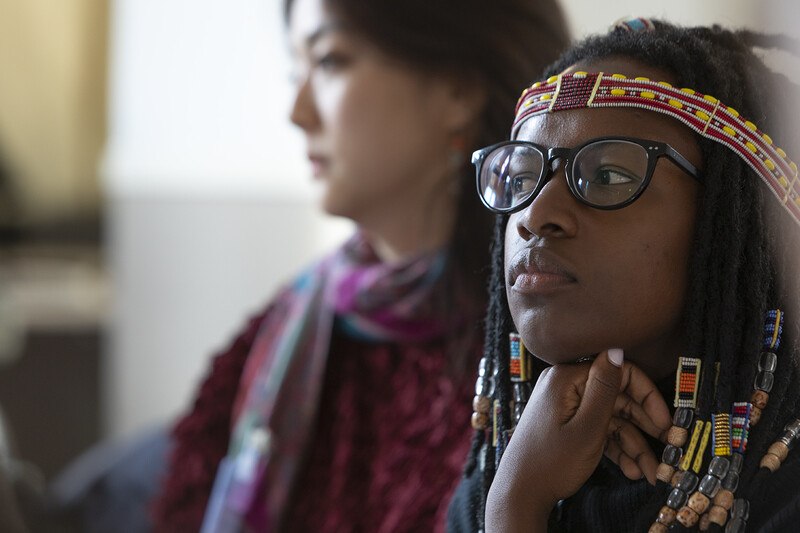 Coming from Nairobi, Kenya, my experience at the Young Curators Academy has been nothing short of exhilarating. After a sleepless flight-too much excitement, I was slotted for rehearsals on the following day at the theatre and I would have to take the train. I have a love/hate relationship with the train system in foreign countries- I always have this horrible fear that I will get lost and I won’t be able to find my way back. In my country the dominant public transport system is a colorful bus or van (popularly known as matatu) installed with a music system and beautiful graffiti of local and international celebrities. It also has a music system fitted inside and it often feels like a moving club with its graffiti tinted windows. In our transport system, there is no order but there is order. Whenever I am abroad I just take an Uber or walk, however in Berlin these were not affordable options. I also have only ever been on one train in my adult life- the Kenyan SGR train from Nairobi to Mombasa. I made sure to leave my hotel an hour before rehearsal to allow me time to get lost but still arrive on time. Luckily I made it well and I got to understand the train system. So much so that I have explored the city a little bit.

The following day was when we all officially met each other. The session started with an introduction from our host Shermin Langhoff and the whole group learning the pronunciation of each of our names- a kind gesture in such an international gathering. This was followed by an introduction of each of our hosts-Irina Szorduch, Ong Ken Seng and Erden Kosova. The rest of the afternoon was dedicated to airing out some of the challenges in our contexts and how we hope to solve or start solving them through this academy. It was interesting to hear we faced the similar struggles from mental health, funding, authoritarian governments, travel visa requirements and even questions on the effectiveness of our work process, most of which I personally related to.

Later in the evening we had an artist dinner where we got to know each other better and discovering your wine buddy. We were also introduced to the exhibition and given a walk through for each artist. On Saturday the conference began and I got to learn more on the concept of ‘heimat’ in my country this term means can be interpreted differently as we have more tribal based differences.

I have been here a couple of days now, very comfortable with the train system, I had studied German a decade ago, it has been great to start understanding it again and being able to use it when asking for directions.

The weekend began with a beautiful presentation of the participants. Each participant seemed to be in flow and sync with the other. It was very mind-opening to learn about all the wonderful projects that each participant was spearheading. I particularly related to Rola’s presentation reflecting on the consumption of American culture which is also rampant on my side of the world. We love the American rappers, classify ourselves according to which rapper/musician we like- American culture is our demigod!

I related a lot to Sreyneang Khon, whose work had been labelled as ‘not tourist’ enough i.e for the white gaze. Same context in my country where precolonial style accessories are made solely for tourism thus pushing them out of the art and fashion spaces.

On Sunday, coincidentally we sort of had a church session with Michelle Higgins a spiritual justice activist. As an African woman I understood her context on discriminatory spirituality- one CANNOT identify as a queer person and be Christian/ Muslim in my country. The queer community is always at risk in my country, they are subjected to arrest, harassment and even death. I also loved the session with Dr. Gina Athena Ulysse. I admired her whole performance especially drawing on chanting and use of spiritual aspects of African culture. I did not even know that you can perform in that manner! In my country, sadly, every single thing about traditional Kenyan spirituality is just labeled as witchcraft – in a very negative way. Already promoting precolonial dress and art is questionable. It is almost difficult to talk openly or practice Kenyan religion/ spirituality. So for me to be in a space where Dr. Gina performed and honored her ancestors so beautifully was extremely mind-changing for me.

We had intense sessions with remarkable artists throughout our stay. What stood out for me was Regina Galindo’s work. Her experience with government censorship is slightly similar to my country’s context. We often refer to it as artivism. However most of our activists face violent beatings and arrests for demanding basic necessities from our government. On my social media, I had shared a glimpse of her work –the demolishing of a BMW - the protest against patriarchy which led to a conversation with Nairobi-based artists and curators. And to destroy something worth millions in my country, was still a bit incomprehensible. Everyone had a different response especially because such a car is a sign of wealth and accomplishment in my country. This also brought up the conversation on what is possible for artists to practice at home versus what they can practice in the western world.

Interacting with Grada Kilomba and her work taught me new perspectives and the longevity for my #OwnYourCulture work. I had always believed art to be linear and just one right way to do it such as either painting or sculpture. But to interact with her work and see how she authentically expresses herself and her multiple methods enabled me envision new ways I could employ in my work. She also talked about how to stand strong in our values- I believe this is important. Sometimes it is so tempting to express ones work in the ways that everyone else has rather than authentically expressing it in one’s way/voice.

During a session with the Centre for Intersectional Justice, we were taught about the importance of spirituality in our work process. This was particularly useful to me as I had been reading on this for a while now, and having that external validation just made the lessons sink in more. In my group we took time to meditate and take it all in, this session was exceptional in that besides my personal meditation session, we had one with my group and finally at the end of the session for five minutes. This was very enjoyable for me because I value and believe in the power of silencing all the noise in the mind- I find my best works comes out of this space. Again the interconnection of authentic spiritual practice in our work.

Another theme that constantly came up in general discussions and smaller groups was the aspect of using or laying more emphasis on the language of the colonizer and the local language being more associated with people of the rural area or of lower economic class. I speak English more than I speak our second national language Swahili and even worse yet my mother-tongue- Kalenjin. It’s almost rare to find upper class young Kenyans openly speaking their local language.
In between sessions watching the precision of the Gorki team in setting up and setting down gave me lots of inspiration to carry home when planning my own festivals or events.

Our Thursday session was held at the renowned Savvy Contemporary space. It was amazing to experience a space I had heard so much about. We were lucky to find the director who spoke to us briefly on moving forward in our work despite obstacles. We had lunch at the venue, prepared by a Berlin-based Rwandese Ms Ida. It was lovely to chat with her and get to know more about her. In her menu saw mixtures that reminded me of home- beans and maize popularly known as githeri-my grandfather had a saying of you do not travel out of your home to eat food that you regularly cook for yourself- this has been a motto for me whenever I travel outside the country- to eat as much foreign food as possible!

The small act of sharing breakfast with participants and learning a little about someone’s culture based on the food they pick for breakfast. This alongside learning people’s life dynamics, small things like where coffee matters more than tea and so on. I found it very insightful to interact with fellow participants and understand their life or their country’s complex history aside from the narrow perspective of the news.
Saturday we finally had a day off- as a fashion girl shopping was my first priority. With my new confidence in trains, I was able to crisscross the city shopping for the best deals- I spent about 8 hours on this. Later that night Gorki theatre was hosting the black magic ball and I won best dressed spectator complete with an actual trophy!
The final two days were filled with a lot of melancholy as the end of our residency got nearer. We had all began forming bonds with each other and there was a looming sadness of leaving this seemingly wonderful bubble to return to work. My last night in Berlin was marked with fiery Chinese dinner, properly chosen and guided by Yuan Fuca our food recommender of the night.

All in all I absolutely enjoyed my time on Berlin- my first experience of the European continent! I loved the scenic architecture surrounding the theatre and it was always a pleasure to indulge myself in these spaces. I loved interacting with my fellow participants I loved meeting everyone from every continent in the world, I loved learning bits and pieces of everyone’s cultures. I am very excited to go back home and put all that I have learnt into practice and to continue on to collaborate with these newly formed alliances.