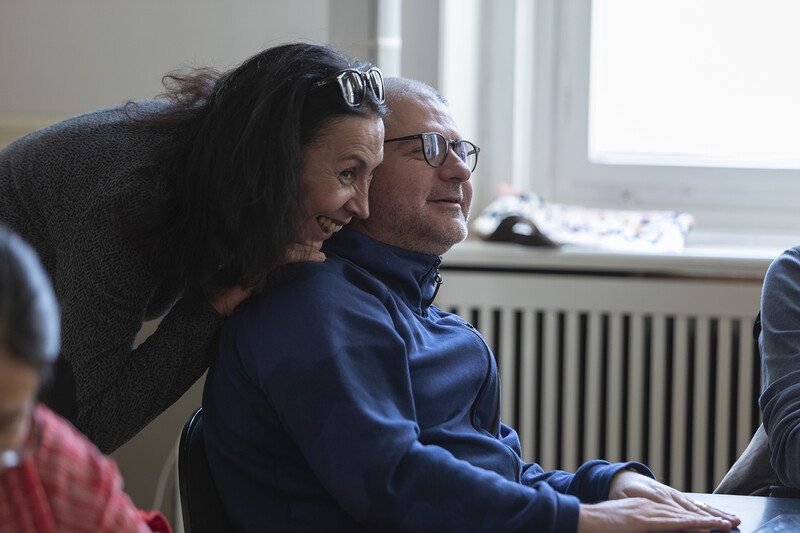 There’s a kind of a kinetic anticipation in the room – already people are forming small constellations around the crowded long tables over coffee and biscuits, exchanging names and niceties – for the very first session of the Young Curators Academy. It’s the first time all 32 of us (the 33rd member of the group, Sreyneang Khon from Cambodia, was denied a visa by the German foreign office) are gathered in the same space. Together with the other two bloggers, Ida Ślęzak and Chepkemboi J. Mang’ira, I’m perched nervously in a corner, preparing myself to make some kind of textual sense of what will be an absolutely torrential next two weeks.

Our hosts, Ong Keng Sen, Irina Szodruch and Erden Kosova, as well as artistic director of the Maxim Gorki Theater Shermin Langhoff, start us off with a few opening provocations and prompts that establish the loose framework of the Young Curators Academy (YCA) with the knowledge that this structure will shapeshift and evolve as we settle in for the ride. The YCA was an idea that grew out of the Curators Academy held in Singapore last year (2018), fuelled by the urgencies of needing a forum to reflect on how to act in a period of challenge and crisis across the globe.

Keng Sen sets out the conceptual container of the YCA by way of the Maxim Gorki Theater as a performance space that asks: “what is the kind of Germany we want?” rather than “what is the kind of theatre we want?” This is a theatre that has profoundly transformed the expectations placed on it by its physical and sociopolitical contexts, and he suggests that we are here to do the same, to embark on a radical transformation of the categories and conditions we have been “slotted into”. He does a quick historicization of the various lineages of the YCA, as well as the roles of his co-hosts Irina and Erden, as a way of emphasizing the kind of historicity required to make sense of the weft of threads – the “red lines”, as he calls it – that draw us together. Whether it’s Irina’s relationship with the Maxim Gorki Theatre, or Erden’s relationship with the Herbstsalon, or how the YCA itself was birthed after three editions of the salon, there are histories and continuities that have led us to this very moment, to today. The rallying cry to “de-heimatize it!” may be the immediate and most visible urgency of the academy, but it’s a beginning point – just as there are invisible and hidden contexts beneath the 34 visible contexts that we come from (Berlin/Germany/the EU as context for the YCA, and the 33 contexts of the YCA participants). Over the next two weeks, I expect that many more of these latent contexts will bubble up to the surface – or anchor and ground us.

The other two co-hosts briefly introduce themselves and their personal interactions with the YCA. Irina mainly works as a dramaturg in creating artistic programmes for the theatre, working closely with her creative collaborators from the arc of the first idea to the last show. “We are often in such a hurry to create, rehearse, and solve problems that we rarely have moments of reflection and exchange that can deepen our practice,” she says, emphasising her longing for reflection and development. A big question for her is what it means to truly practice solidarity. She works with people from a lot of different conflict zones, developing performance based on experiences of war and conflict, and has found that in all the shows she works on there is usually a moment of crisis – “a moment we’re scared of, but that is also the most creative moment”. And she’s curious about and deeply interested in this moment of crisis in the context of the YCA – that we can have honest discussions about what our crises and challenges are.

Erden talks about his involvement in radical politics and anarchist groups in the 1990s, which he calls a “lucky period” in his own context and a period of great synergy, one that rode a strong momentum that we can make a change in the social texture through cultural practice. It’s these kinds of spaces, like the YCA, that are spaces under risk. They are prone to the cooptions of institutionalisation and commercialisation, and can be readily instrumentalised by the status quo. And given the pressures we’ve tasted over the last decade, these new and transformed spaces somehow seem less and less willing to take risks, to give up what they have in return for more secure, compromised positions. So he’s grateful to the initiators of the academy for a space of criticality that can continue the kind of spirit of the 1990s that he brought up earlier.

With that, it’s time for the 32 of us to introduce ourselves; the co-hosts have set the tone for these introductions – drawing from the action of historicizing, the crises we face, how to sustain our practices and their future potentialities, what responsible criticism looks like in our respective contexts, and the kinds of sensitivities and radicalities we navigate. The co-hosts invite us to talk about what we’re curious about, as well as the challenges we face, and any other burning issues and urgencies we want to bring into the frame at the YCA.

I’ve decided to organise these introductions according to some of the larger, pressing threads and associations I’ve drawn out from the 32 sharings, with a statement or question from each participant that I feel encapsulates the kinds of energies present in the room. There will be some repetition – but also some gaps, because not everything will sit easily within or astride these threads I’ve started pulling at, and unravelling. I invite you to sit in those gaps and that discomfort with me.