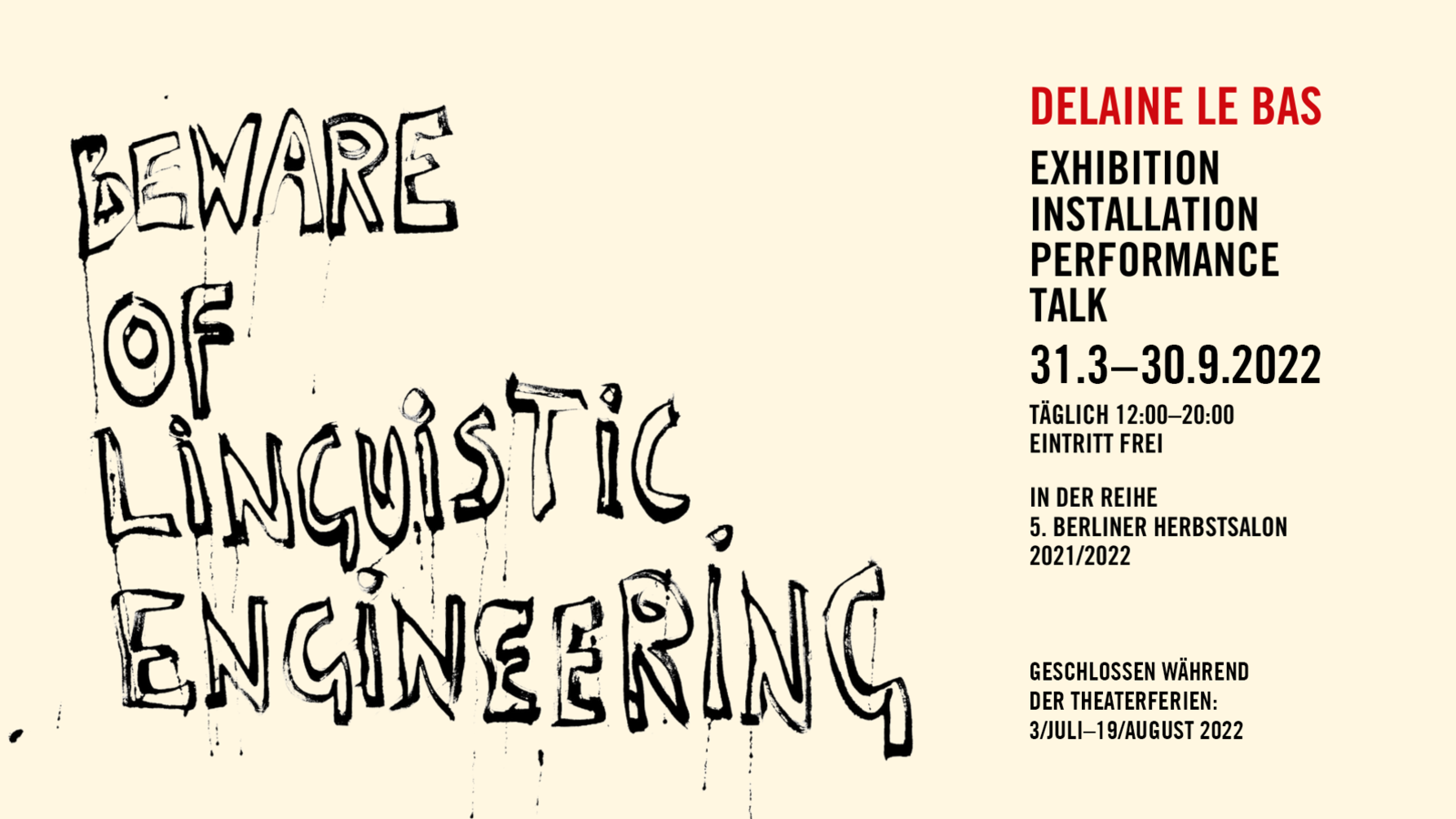 The 5th Berliner Herbstsalon, under the title »Solidarity of Fragments«, accompanied the Gorki over two seasons due to the pandemic in an adapted and extended format: a series of impressive analogue and virtual exhibitions, interventions, performances and discussions with individual artists and public gatherings. The Kiosk, the newly acquired storefront adjacent to the theatre's garden, has become the festival's main exhibition space.
Our real fractured society and fragmented solidarities are in danger of ripping further apart through the way in which we conventionally speak about them. To oppose this, the 5th Berliner Herbstsalon extended an invitation to a solidarity of splinters and fragments, to new alliances and movements. The previous editions of the Herbstsalon dealt with issues such as nationalism, colonialism, migration, border policies and patriarchal structures, and looked at the ways in which critical forces can spark a social change through intersectional thinking, solidarity and inclusion.
The 5th Herbstsalon has resumed this thematic framework and was initiated with the Political Voice Institute (PVI), a social laboratory exploring contemporary chorus theater, which was founded at the Gorki under the direction of Gorki artist-in-residence Marta Górnicka. The PVI’s interventional performance Community: An App for One Person investigated the (im)possibility of keeping community alive in times of social distancing and acted as a pre-opening of the Gorki Kiosk. The institute’s performers also participated in Górnicka’s mainstage production Still Life: A Chorus For Animals, People And All Other Lives, a choral manifesto that exposes the pervasive mechanisms of human violence, and which opened the 21/22 season.
The stronger still project was composed of four separate exhibitions and discursive events and focused on the increased repression of thought, journalism and artistic expression in countries ruled by authoritarian regimes in the past decade. Alongside other works and installations, stronger still featured a solo exhibition by the Kurdish artist Zehra Doğan. In the second edition of the Young Curators Academy (YCA), young people from different parts of the globe came together to discuss themes such as care and repair, and planetary consciousness. Fostered by the framework of the meetings, some of the YCA contributors have also prepared collections of artworks and objects for The Curator's Suitcase.
After visiting Chemnitz and Jena, the travelling exhibition Open Process was presented at the Gorki as part of the Berliner Herbstsalon. Engaging critically with structural racism and right-wing violence in post-war Germany, the exhibition was also accompanied by an extensive events programme aiming to give voice to people who have been the targets of exclusion and violence because of socio-cultural differences. The 5th Berliner Herbstsalon will close with Beware of Linguistic Engineering, a solo exhibition by British artist Delaine Le Bas. With her new works, Le Bas questions the discriminatory policies and practices of injustice that prevail in neoliberal Western societies and the recurring errors of »linguistic engineering« aimed at creating a politically correct language ergo social atmosphere, especially in the context of the UK.